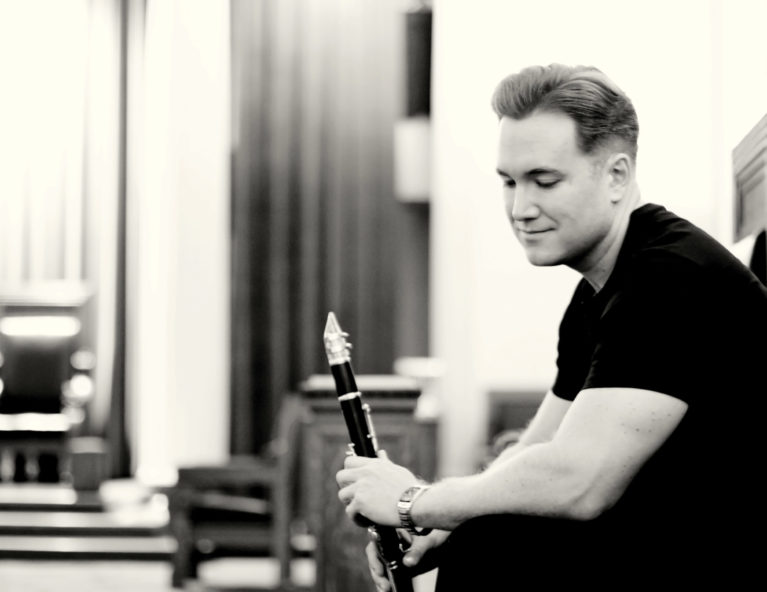 Dave Bennett doesn’t fit the mold. For starters, you don’t find many jazz clarinet players who name Alice Cooper, Stevie Ray Vaughan, and Chris Isaak among their influences. You also won’t find many musicians who are equally conversant with the music of Benny Goodman (the “King of Swing”) and Roy Orbison (“The Soul of Rock and Roll”). Bennett is a clarinet virtuoso who plays electric guitar, piano, drums, AND vocalizes. Leading his Tribute to Benny Goodman, Dave has been a featured soloist at Carnegie Hall with The New York Pops (2013) and has played the show with 35 other US and Canadian orchestras. Dave has been featured on NPR Radio’s “Jazz at Riverwalk.” He made his European debut in 2008 at the Bern Jazz Festival (Switzerland) in a combo with jazz legends and Benny Goodman band alumni guitarist Bucky Pizzarelli and vibraphonist, the late Peter Appleyard. Dave is a Mack Avenue Records artist. His 2013 CD Don’t Be That Way met with critical acclaim. His second release, Blood Moon, which features five originals and six pop/jazz covers, hit the No 24 on the Billboard Jazz chart in 2018.

Jeff Kressler has been an active jazz pianist and arranger for many years. He received his B.M. and M.M. from Michigan State University and has contributed dozens of arrangements to the libraries of both the Spartan Marching Band and the Jazz Ensemble. He has also written arrangements for the Lansing & Flint Symphony Orchestras in addition to bands at several universities and high schools throughout the nation. In addition, he has many original compositions and arrangements published by Watchdog Music. He has also performed with many of the top jazz artists in Michigan and has played with both the Woody Herman and Jimmy Dorsey Orchestras. Jeff is a retired high school band director of DeWitt Public Schools, a former director of the Alma College Jazz Ensemble, and is currently in his 12th year as the Jazz Keyboard instructor at Central Michigan University.

Shelly Berger resides in Toronto and is a busy arranger, composer, and producer in numerous musical settings. He worked as a bassist and arranger in Los Angeles for nine years, a time when he recorded and toured with jazz artists such as Diana Krall, Louis Bellson, Kenny Burrell, Herb Ellis, Lew Tabakin, and Anita O’Day, for whom he served as Musical Director. In the world of contemporary entertainment, Berger worked as an arranger-producer for Sharon, Lois & Bram, Quartetto Gelato, and Matt Dusk, and produced, arranged, and recorded with numerous pop acts including Loreena McKennitt, Chaka Khan, Don Ross and Emilie-Claire Barlow. In the broadcast field he served as arranger/producer for television series including The Elephant Show and Sesame Street, as well as themes for TSN Sportsbreak and TSN Toronto Blue Jays and Montreal Expos baseball broadcasts.

Coming from a Polish-American family, Pete Siers's first exposure to music came from listening to polkas at home. Starting piano lessons at the age of six, he continued with the ivories until he heard the US Army Big Band with a drummer who impressed Siers to the point that he switched to drums. Siers earned a music degree from Aquinas College where he played with the jazz ensemble. Siers is comfortable with virtually any style of jazz music. In addition to performing with big bands and small groups, he has performed with musicians representing dissimilar styles, including Lee Konitz, Sonny Fortune, Doc Cheatham, Frank Morgan and Warren Vache. He has appeared at the North Sea, Playboy, Sunfest and other major jazz festivals in the United States and Europe. Siers also heads Los Gatos, a Latin jazz quintet featuring the music of Cal Tjader and the Pete Siers Quartet, which explores creative improvisational material.