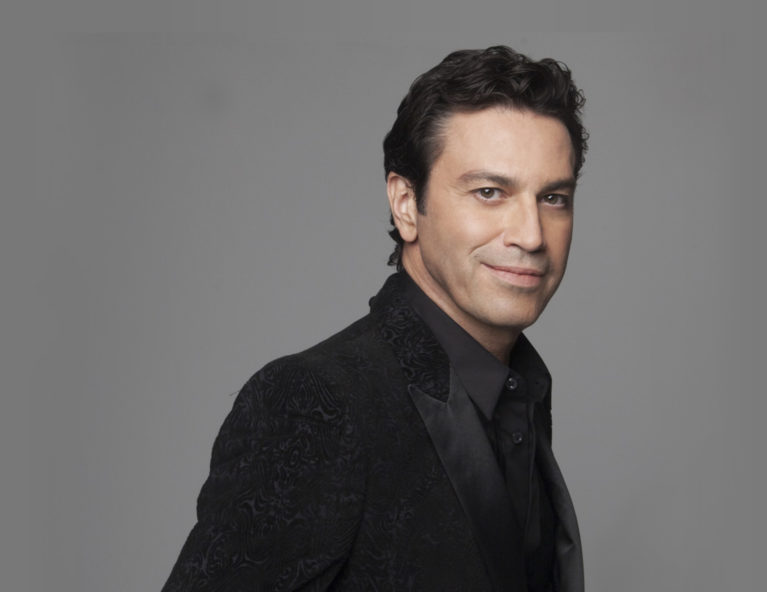 Mario Frangoulis is a Classical Crossover artist and tenor known the world over for his powerhouse vocals and charismatic live performances. Billboard calls him ''Daring and inspring!'', while CNN.com says “His world is distilled to pure sound, all voice.”

Born in Africa and raised in Greece, he studied at London’s Guildhall School of Music and Drama where he was discovered by Sir Cameron Mackintosh, referred to by the New York Times as “the most successful, influential and powerful producer of our time.” Mackintosh immediately cast him to play Marius in Les Misérables in London’s West End and soon after, he was invited by Sir Andrew Lloyd Webber to play the role of Raoul in Phantom of the Opera to great critical acclaim.

It was during this time, that Mario discovered the operatic side of his voice. As a winner of the Maria Callas scholarship and Pavarotti competition, he found himself on a path to Italy to study with the late tenor Carlo Bergonzi.

Upon the recommendation of one of his mentors, the legendary mezzo-soprano Marilyn Horne, Mario went to Rome to audition for the acclaimed tenor Alfredo Kraus who was performing with Nicola Rescigno (Maria Callas’ favorite conductor). Both were impressed. Mario then became the only private student the late Kraus ever accepted. They traveled throughout the world, with Frangoulis studying and learning while Kraus performed. This intensive training cultivated Mario’s solid vocal technique and good high notes, both hallmarks of Kraus’ style. He continued to cultivate his vocal skill at the Julliard School of Music in New York, studying under the guidance of Dodi Protero.

Mario has performed in a wide range of roles in his career that have utilized his broad and deep skillset and talent – both as a singer and actor. In the New Millennium he won (out of thousands) the role of Tony in West Side Story and performed at Milan’s La Scala. He has played roles from The King and I with Barbara Cook, and Alfred Drake from Kiss Me Kate in the film De Lovely, performing the song “So In Love” with world-famous singer Lara Fabian, to lead roles in ancient Greek theater such as The Birds by Aristophanes and epic roles such as Dionysus, Achilles, and Prometheus performing in epic theatres such as Epidaurus in Greece and Pergamon in Turkey.

His recording career launched when he was discovered by Peter Gelb, the head of Sony Classical, who now runs the Metropolitan Opera in New York. Since that time, he has completed over 15 personal recordings and sold over 1,000,000 albums worldwide. His debut as a Classical Crossover artist launched in 2002 with the release of Sometimes I Dream with a second album Follow Your Heart fast on its heels (2002, 2006). Both international albums solidified Mario as a Top 3 Classical Crossover Artist on Billboard where he held the #2 and #3 positions with Andrea Bocelli and Josh Groban for over 50 weeks. He is consistently ranked in the top 10 on international charts, and in 2011 was voted Best Male Classical Crossover Artist globally, recognizing him as one of the most important artists in the genre.

Mario Frangoulis is known for his refined vocal interpretations, and unique ability to sing in over 5 languages. He combines the classical and contemporary and loves to blend multiple styles (opera, pop, rock, folk, soul / R&B, world). He has performed with world-class artists from Placido Domingo and José Carreras to Lara Fabian and Sarah Brightman, to Justin Hayward and Klaus Meine; and orchestras such as the Boston Pops, Chicago Symphony, Dallas Symphony, Tokyo Philharmonic, Novaya Opera of Moscow, and the Philharmonia Orchstra of London (to name a few). TheatreJones.com said, “Frangoulis has a simply beautiful voice. Enjoying a live performance of this sound was worth the price of admission. But he has more than this. His ability to rivet the adoration of the audience to his every motion was stunning.”

In late 2012, Mario was invited by Robin Gibb to record one of the last songs he ever wrote, “Daybreak,” from his epic composition The Titanic Requiem. In honor of Gibb, Mario performed it for the first time in an emotional concert recorded for public television in the USA with the historic Boston Pops at Symphony Hall with the acclaimed Keith Lockhart conducting. Mario Frangoulis Live With The Boston Pops, his third public television special after Sometimes I Dream and Music Of The Night, aired in late 2012/early 2013 and has reached over 50M households throughout the USA and Canada airing mostly in prime time in the Top 10 television markets.

In 2015, Mario teamed up with six-time Grammy winning maestro, arranger and producer Jorge Calandrelli to respond to his fans’ plea for a holiday album. The result is a world-class spiritual album — Tales of Christmas — released worldwide in October, 2015. During the creation and recording of the album, Mario enjoyed over 30 major performances with highlights at New York’s Jazz at Lincoln Center, a special piano-voice recital with maestro and pianist Eugene Kohn (Placido Domingo, Andrea Bocelli and Maria Callas’ accompanist in her famous “Master Classes” at Julliard in New York) at the foot of the Acropolis at the Herod Atticus Theatre, and a major solo performance in Dallas at the Winspear Opera House.

Frangoulis is beloved by his supporters and fans not only because of his vocal talent, but also because of who he is as a human being. Throughout his 25+ years on stage, he has been unwavering in his life-long commitment to humanitarian causes, especially those that pertain to the protection of children. He is an International Ambassador for the Horatio Alger Association of Distinguished Americans in the United States and Canada, and Ambassador of Peace for Nobel Peace Prize Winner Betty Williams’ World Centers of Compassion for Children International in Europe. The list of charities and philanthropic initiatives he has supported over the years is long, and include the José Carreras Leukemia Foundation, Give US Your Poor, The Jericho Project, the Dalai Lama Center for Peace, Prince Charles of England’s Charities, UNESCO and many more.

As Mario says, “Ultimately, I believe that our lives and purpose should be about preserving what is good in this world – striving for peace and compassion – and doing this through music and an undying commitment to love. You have to show your personality, your character, and most of all your truth. You have to express the hopes of your soul, and that’s what my music is about. It’s simply about what it means to be human… I of course want to be remembered as a talented artist, but most of all, I want to be remembered as a human being who did his part to make this world a better place.”