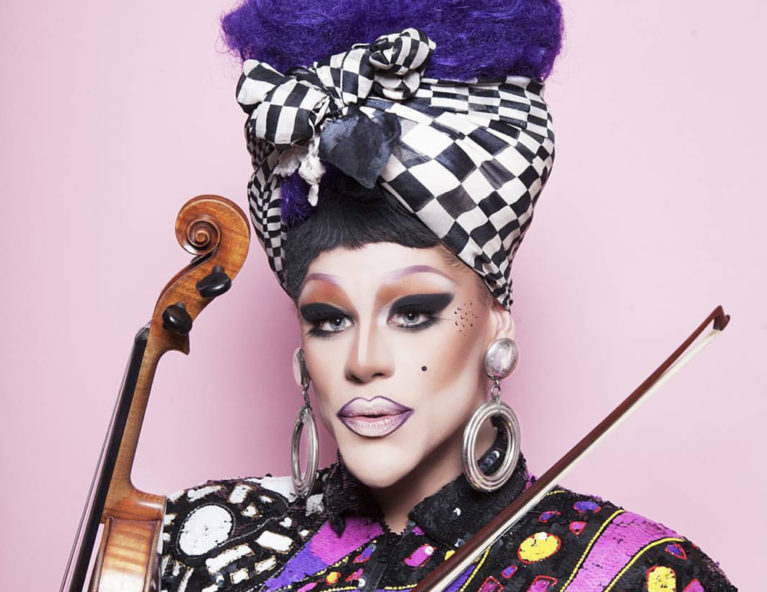 Since appearing on season 8 of RuPaul’s Drag Race and All Stars season 3, Brooklyn’s fashion clown has been traveling the world, bringing to audiences her trademark wit, sense of humor, and musical charm.

In 2018, “Thorgy and the Thorchestra” made it’s debut in Halifax, Nova Scotia with two sold out nights and to rave reviews. Since then, Thor has made plans to take her Thorchestra show to audiences around the globe.

Thorgy has appeared on Amazon’s Mozart in the Jungle, where he showcased his violin skills in drag. He interviewed famed figure skater Adam Rippon in a special for Vice. Thor has also been a repeat guest on Bravo’s Watch What Happens Live, appearing alongside Goldie Hawn, Amy Schumer, Lily Tomlin, and Jane Fonda. He was also a special guest performer as part of Eliot Glazer’s Haunting Renditions in 2017. As a part of multiple “Haters Roast” and other comedy tours, Thor secured himself as a comedic powerhouse in the world of drag. Thor’s comedic prowess also secured her a role in a new musical, “Oh My God, Broadway”, set to debut in late 2018, alongside Sally Struthers and Bonnie Milligan. Over the last few years, Thorgy Thor has had the pleasure of playing violin with many recording artists including NYC legend Joey Arias, as well as performing with over 6 major orchestras, gracing the stages of Town Hall NYC, Le Poisson Rouge, Lincoln Center and Carnegie Hall. Thor uses unconventional recording materials and music to create unique performances for theater, video, cabaret, and for nightlife entertainment. An explosive performer who loves to lip-sync just as much as create collaborative performance art that mashes together drag, music and comedy. After spending his early years studying Violin, Viola and Cello, Thor earned a dual degree in Violin and Viola Performance. While studying at Hart School of Music and Purchase Conservatory, Thorgy also earned an honorary degree in Drag Ridiculousness, performing his original works of art entitled Maitri and Pocket to Pocket. Thor also starred in theater productions of Bad Splices and Psycho Beach Party. Moving to Brooklyn in 2006, Thor exploded in nightclubs, theater projects, street performances and photo series throughout Brooklyn and NYC. He has since been nominated for numerous awards presented by the Glam Awards, Get Out Awards, Odyssey Magazine Awards, and the Brooklyn Nightlife Awards, winning the LEGEND award and taking home Best Group Show of the Year award at the Brooklyn Nightlife Awards and the Glam Awards, respectively.