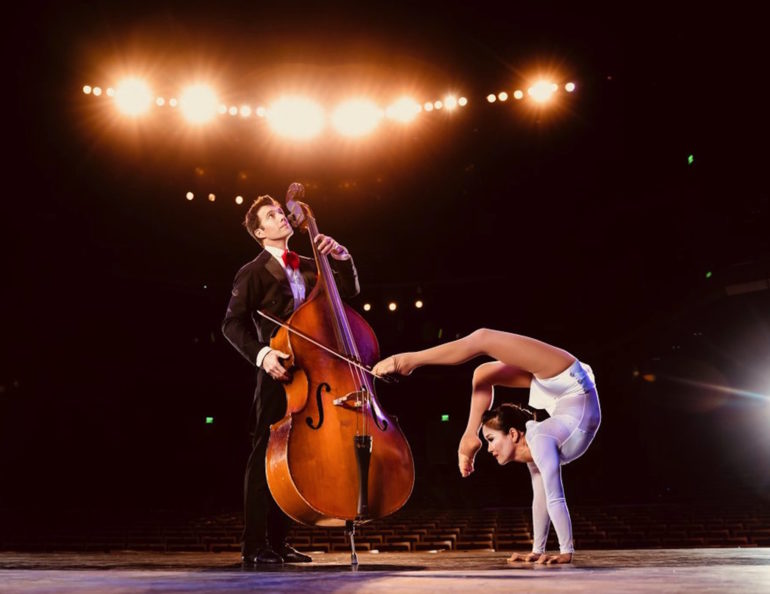 About Troupe Vertigo
Los Angeles based Troupe Vertigo was founded in 2009 by wife and husband team Aloysia Gavre and Rex Camphuis. With an eclectic mix of Circus-Dance-Theater, Troupe Vertigo shows ignite the imagination in mentally and physically spell-binding ways. Working in collaboration with national symphonies, Troupe Vertigo’s high-caliber cirque acts are seamlessly woven together with each symphony’s unique music selections—creating an evening of stunning physical feats choreographed into works of art. Among these creations are Cirque-Cracker (Phoenix Symphony), Cirque Broadway (Baltimore Symphony) and Cirque Cinema (Philly Pops and Indianapolis Symphony). Troupe Vertigo Performance highlights include Nighthawks: a Film Noir Circus at LA’s Ford Amphitheater, Tableaux featuring an all-female cast, Taylor Mac’s A 24-Decade History of Popular Music at UCLA’s Center for the Art of Performance and TEDx at USC. Troupe Vertigo’s facility is also home to Cirque School, LA’s premier circus training space committed to inspiring an appreciation for the circus arts “for Anybody with Any Body.”

Aloysia Gavre got her start in the circus arts with the Pickle Family Circus in her hometown of San Francisco, going on to perform in over 2,000 shows in over 10 countries with Cirque du Soleil and representing them to special acclaim at the Monte Carlo International Circus Festival. As an independent aerial artist, Gavre performed for over 10-years with notable Symphonies across the globe including the Kennedy Center and the Sydney Opera House. In addition to her work as circus creator with Troupe Vertigo and Cirque School LA, Gavre collaborates with Cirque Mechanics as co-director and choreographer. Her expertise has been used in numerous commercials and films such as “Water for Elephants” and “Pitch Perfect 2.” Gavre was featured on the cover of Dance Teacher Magazine, Dance Informa, NPR and the book The Ordinary Acrobat for her expertise in circus-arts. Speaking engagements include TEDx, Center Theater Group, Directors Lab, Chicago Circus Festival, AYCO and VIVA Fest Las Vegas.