Vancouver Symphony Orchestra: A Tribute to the Beatles 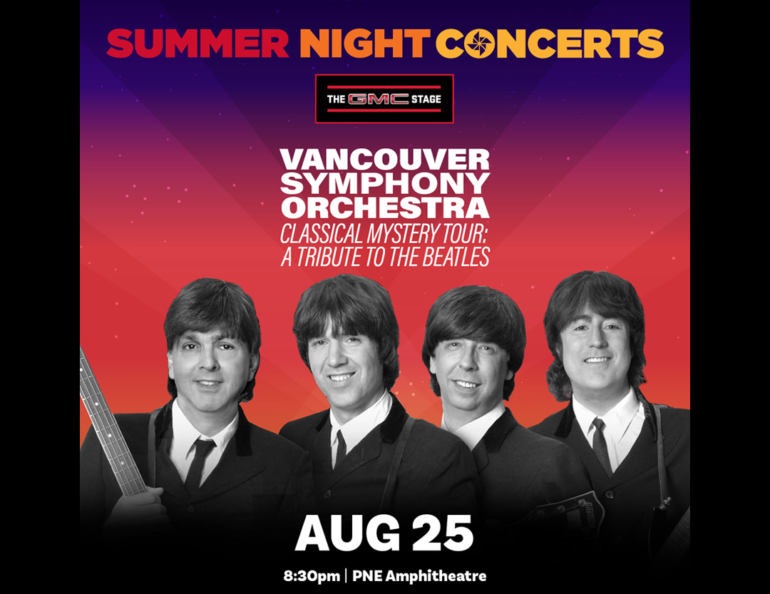 CLASSICAL MYSTERY TOUR: A TRIBUTE TO THE BEATLES
IN CONCERT WITH THE VANCOUVER SYMPHONY ORCHESTRA

What would The Beatles have sounded like if they had the chance to perform live in concert with a symphony orchestra?  Find out when Classical Mystery performs live with The Vancouver Symphony Orchestra.

The four musicians in Classical Mystery Tour look and sound just like The Beatles, but Classical Mystery Tour is more than just a rock concert. The show presents more than two dozen Beatles tunes performed exactly as they were originally recorded.  Hear “Penny Lane” with a live trumpet section, experience the beauty of “Yesterday” with an acoustic guitar and string quartet, enjoy the classical/rock blend on “I Am the Walrus,” and relish the cascading crescendos on “A Day in the Life.”

From early Beatles music on through the solo years, Classical Mystery Tour is the best of The Beatles like you’ve never heard them before. You might say it’s the best show the Beatles never did!

Classical Mystery Tour has performed with more than 100 orchestras across the United States, Canada and around the world, receiving accolades from fans and the media. The Los Angeles Times called the show “more than just an incredible simulation…the swelling strings and soaring French horn lines gave the live performance a high goose-bump quotient…the crowd stood and bellowed for more.”

“We really make an effort to sound exactly like the originals,” explains James Owen, the founder of Classical Mystery Tour who also portrays John Lennon in the show. “The orchestra score is exact, right down to every note and instrument that was on the original recording. On ‘Got to Get You Into My Life,’ we have two tenor saxes and three trumpets. That’s what it was written for, and that’s what we use. And on ‘A Day in the Life,’ that final big orchestra crescendo sounds amazing when it’s played live.”

The release of The Beatles music on ITunes, plus the popularity of The Beatles Box Set and Beatles Rock Band, set off a new wave of Beatlemania and proved that The Beatles are more popular than ever. Because many Beatles fans never had the opportunity to experience a live Beatles show, Classical Mystery Tour offers that live experience—with a symphony orchestra.

“We have some real show-stopping numbers,” says Owen. “I wish I could actually be in the audience to see and hear this show, because the power of the emotional and nostalgic connection this music has with audiences is hard to put into words.”