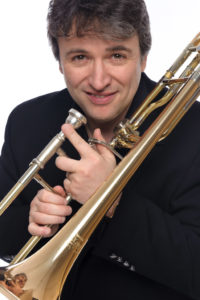 Hailed as “the Jascha Heifetz of the trombone” (Le monde de la musique) Trudel is one of the world’s most respected and renowned trombonists.

In 2018 he was awarded the prestigious International Trombone Association Award for his outstanding contribution. His most recent recording of the Jacques Hétu concerto, where he plays and conducts his Laval Orchestra is nominated for best large orchestral recording at the 2021 Juno.
Trudel made his solo debut at the age of 18 with Charles Dutoit and l’Orchestre Symphonique de Montreal and has continued to grace the world’s stages for nearly 30 years, including appearances with l’Orchestre Philharmonique de Radio-France, the Hong-Kong Philharmonic, the Austrian Radio Orchestra, Carnegie-Weill Recital Hall (NY), Dresdner Neueu Musik Tage (Germany),Tasmania New Music Festival (Australia), Festival Musica Strasbourg (France), Klangbogen Festival (Vienna), Akiyoshidai and Hamamatsu festival (Japan).

A long-time pedagogue and mentor, Trudel has been instrumental in teaching and guiding new generations of musicians for more than 30 years. He was a tenured professor of trombone and chamber music at the Conservatoire de Musique du Québec à Montréal from 1995-2008 and has served on the faculties or given masterclasses at numerous music festivals and schools including the Conservatoire National Supérieur de Paris, The Juilliard School, New England Conservatory, Hochshule Köln, Hamamatsu Festival, Graz akademie, Italian Brass Week and the University of Hong- Kong. He was Director of Orchestral and Operas at Western University from 2012 to 2016 where he also serves on the brass faculty and held a similar position at the university of Ottawa.

A Yamaha artist for the last three decades the company has internationally distributed the Alain Trudel mouthpiece designed with his specifications.

Recently appointed Music Director of the Toledo Symphony (USA), Trudel has been praised for his “immense talent as conductor, musician and performer” (La Presse). He is also Music Director of l’Orchestre Symphonique de Laval.
Trudel also held conducting positions at the National Arts Centre Orchestra, the Ottawa Symphony Orchestra, Orchestra London and the Manitoba chamber orchestra. Trudel was also the CBC Radio Orchestra conductor, taking the orchestra to new heights of artistic quality, as well as public and critical acclaim.

Trudel has conducted every major orchestra in Canada as well as orchestras in the UK, USA, Sweden, Brazil, Italy, Russia, Japan, Hong-Kong, Malaysia and Latin America. He has been a regular guest with the Opera de Montréal and in March 2017 he conducted to great acclaim the world premiere operatic version of “The Wall” (“The entire audience was on its feet for another standing ovation, with concertgoers shouting “wow” and “bravo.” Rolling Stone Magazine, “The Wall Triumphs in Montréal.”  Le Figaro, Paris). Trudel will also lead the American premiere at the Cincinnati Opera.

Always committed to upcoming generations of musicians, Trudel was Conductor of the Toronto Symphony Youth Orchestra from 2004 to 2012 and has regularly been invited to conduct the National Youth Orchestra of Canada. Their recording of the Rite of Spring and of Mahler’s sixth symphony was selected as finalist at the Junos.

Trudel is the recipient of numerous awards and honours, among them the Virginia Parker Prize, Jubilee medal from the Queen of England, the Heinz Unger Prize, the Mildred Dixon Holmes Award, Ambassador of Canadian Music by the Canadian Music Center.

In 2019 Trudel was knighted by the government of Quebec (ordre du Québec).