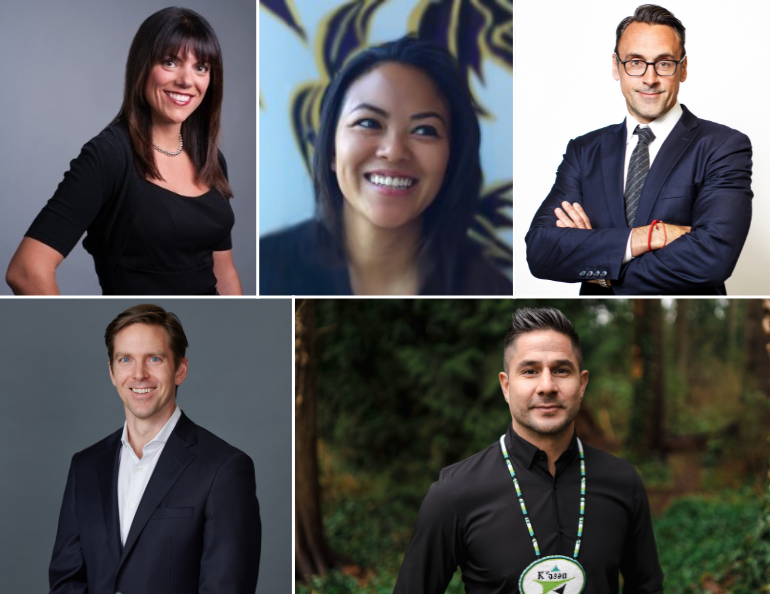 Following annual general meetings on Dec. 1, the Vancouver Symphony Orchestra (VSO) and VSO School of Music (VSO SoM) are pleased to announce five new members of the community joining their Boards of Directors.

“We’re honoured to welcome these new Directors to the VSO and VSO School of Music” says Angela Elster, President and CEO. “These individuals bring considerable business acumen to both organizations, have demonstrated a strong commitment to serving their community, and will help us deepen our connection with audiences and students across the Lower Mainland.” Timothy Cuffe, Andrew Gubbels, and Dennis Thomas “Whonoak” have joined the VSO Board, and Anne Caraan and Manijeh Colabella (Secretary) have joined the VSO SoM Board. Led by Chair Etienne Bruson, the VSO Board of Directors would also like to also announce that Roy Millen (Former Executive Committee Member) has been appointed as Treasurer.

One of North America’s only orchestras to have its very own music school, the VSO SoM is delighted to announce the appointment of its new Chair, Elisabeth Finch, who previously served as Secretary. The organization would like to thank outgoing Chair Dave Cunningham for his service to the VSO SoM over the past 11 years, having led the school through a time of considerable change and growth.

Anne is passionate about redefining the boundaries of online education and expanding the virtual learning experience.  She is excited to work with the VSO School of Music to continue offering impactful programs in community, evolve its virtual presence and expand its reach.  She brings over a decade of experience sitting at the intersection of technology, change management and education and is currently the Principal Technologist of Online Education at Staffbase.

Manijeh Colabella
Secretary, VSO SoM Board
Manijeh is a senior governance consultant and lawyer at WATSON Advisors Inc. where she helps boards of directors and their committees through governance reviews, board and director evaluations, and policy manual development. Manijeh also advises boards with respect to emerging governance issues, governance structures and frameworks and is a facilitator in WATSON’s Governance Academy delivering governance education programs to both individual directors and boards. Manijeh has over 25 years of experience in governance and law working with private and public companies, not-for-profit organizations, regulatory bodies, associations, and public sector organizations.

With over 25 years of financial, media and public relations experience, Timothy Cuffe is a skilled marketer who pairs his passion for elevated communications with his commitment to community and education. Tim is currently the Director of Marketing at Nicola Wealth, one of Canada’s fastest-growing independent wealth management firms, where he oversees the strategic vision, operations, and growth of a 15-person marketing team responsible for sharing and shaping the Nicola Wealth brand. Prior to his time at Nicola Wealth, Tim established his career in Hong Kong as a foreign correspondent before moving into marketing leadership positions at HSBC and Barclays in Hong Kong, London & New York.

On top of a degree from Simon Fraser University and graduate work at the University of Oxford, Tim maintains a focus on education, acting as an adjunct professor at UBC’s Sauder School of Business. He also holds several leadership positions on committees, raising funds for children’s health and the arts.

Elisabeth Finch
Chair, VSO SoM Board
Elisabeth is a Partner with PwC where she has had a career in the tax practice for 25 years. Since moving with her family to Vancouver nearly 20 years ago, she has been active in the Vancouver choral community, singing with Elektra Women’s Choir, including in regular collaborations with the VSO under Maestro Tovey. She served on the boards of Elektra Women’s Choir and the VSO before joining the VSO School of Music Board in 2020 and attaining her ICD.D designation in 2021.

Andrew resides in West Vancouver with his wife and four children. He is a strong supporter of the Arts in his community and is a committed patron of the Vancouver Symphony Orchestra. Presently, Andrew is the Chief Financial Officer of Gold Royalty Corporation and was previously a founding executive and held the position of Senior Vice President, Corporate Development at Aris Gold Corporation. Prior to Aris Gold, Mr. Gubbels was Head of Americas Metals & Mining at UBS Investment Bank and an executive in the Mergers & Acquisitions department at CIBC World Markets. Andrew graduated from Queen’s University with an Honours Bachelor of Commerce and the University of Toronto with a Master of Finance. When not attending concerts at the VSO, Andrew can be found in the mountains as an avid and competitive cross-country skier and cyclist.

Roy Millen is a partner at Blake, Cassels & Graydon LLP in Vancouver. He carries on a diverse practice with particular experience in Indigenous rights and title, commercial litigation and international trade. In the area of Aboriginal law, Roy advises private-sector clients across Canada on the development of energy, mining and other major projects, and relationships with Indigenous peoples. In litigation, Roy has succeeded in all levels of court, including the Supreme Court of Canada, as well as arbitration and administrative tribunals. Roy regularly chairs and speaks at conferences across Canada, and volunteers his time with many community and legal organizations.

Dennis Thomas “Whonoak” is a member and an elected Councillor of the Tsleil-Waututh Nation (People of the Inlet) in Deep Cove, North Vancouver.  Dennis began working for his community in 2007 as the 2010 Coordinator for the Vancouver 2010 Olympic and Paralympic Winter Games. Since then, Dennis pursued business with his Nation and managed several band-owned companies, including Takaya Tours, an internationally recognized Indigenous tourism business. This is where he connected with his cultural roots and now is a cultural ambassador in his community. He strives to embed his Nations’s culture in all areas so that the ancestral knowledge is awake and alive. He also led new business ventures, including implementing the largest Solar array project to date in the North Shore, which inspires him to practice and implement green energy.  As a consultant, he was TWN Cultural Liaison for MST Development Corporation, where he ensured Tsleil-Waututh Nations’ history and culture are at the forefront and rooted in the building structure, architectural design, and the overall public realm. He holds an MBA from Simon Fraser University specializing in Indigenous Business Leadership. He is also a recipient of Business in Vancouver’s 2021 Top Forty under 40.

Founded in 1919, the Grammy and Juno-award winning Vancouver Symphony Orchestra is the third largest orchestra in Canada, the largest arts organization in Western Canada, and one of the few orchestras in the world to have its own music school.

Led by Music Director Otto Tausk since 2018, the VSO performs more than 150 concerts each year, throughout Vancouver and the province of British Columbia, reaching over 270,000 people annually. On tour the VSO has performed in the United States, China, Korea and across Canada.

The orchestra presents passionate, high-quality performances of classical, popular and culturally diverse music, creating meaningful engagement with audiences of all ages and backgrounds.

About the VSO School of Music

Envisioned by Bramwell Tovey (Music Director Emeritus), Arthur H. Willms (Honorary Life Vice President) and Jeff Alexander (former VSO President and CEO) in 2003, the VSO School of Music was created to provide a modern educational institution next to the Orpheum Theatre, where students of all ethnic and socioeconomic backgrounds could enjoy lifelong learning and the majority of instructors would be members of the Vancouver Symphony Orchestra. Macdonald Development Corporation was approached by the VSO to buy the Capital 6 movie theatre that formerly occupied the site, with the intention of building a music school: the concept, including a residential tower above, was immediately embraced by the company. Wall Financial Corporation later took over the lead role in the project, and oversaw the construction of the school and residential tower designed by Bingham Hill Architects. Made possible through the City of Vancouver’s Cultural Amenity Bonus Program, the residents of British Columbia have now been provided with a new community music school, serving students from 3 months old to senior citizens, catering to all ability levels from beginners to aspiring professionals.