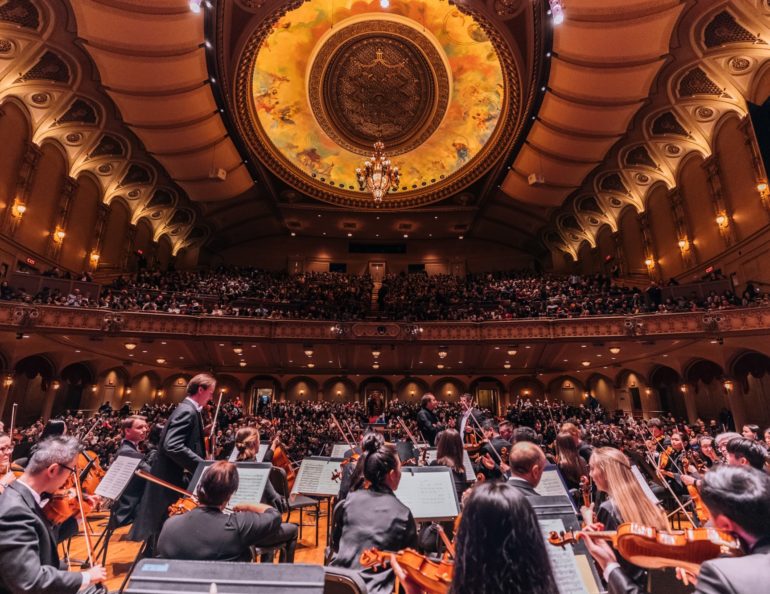 The season programming underlines the VSO’s commitment to creating equity both on stage and in the repertoire performed. Four new works from Indigenous Canadian composers showcase the depth, talent, and variety of voices in our community. Maestro Otto Tausk will share the podium with guest conductors Anna Rakitina and Speranza Scappucci. A focus on Canadian special guests this season has artists ranging from Angela Cheng to Blake Pouliot to Teiya Kasahara.

Building on the incredible success of TheConcertHall.ca, Canada’s first subscription streaming service for symphonic music, the VSO will continue its digital broadcasts, moving to the new VSO Online series. Ten full concerts will be livestreamed from the Orpheum stage throughout the season.

“We have come through a most challenging and strange time. Now, let us turn a page and come back to the things we love most. For the musicians of the VSO and myself, that means making music with you. This will be a season of return, discovery, adaptation, and evolution.”

“The VSO’s 103rd season is momentous and marks a significant milestone in our history as we return to live performances after almost two years absence.  The 21/22 VSO season is one of recovery, reinvention, and a shift to a new reality. We will celebrate our return to the concert hall with a multitude of audience favourites but will also introduce audiences to new voices, diverse voices, and healing voices.  We invite your imagination and creativity into a journey of discovery for your senses, your heart, and your soul.

This inspiring 21/22 season is a hybrid of live concerts – as we know how much you have missed these – and virtual concerts which are easily accessible to those who prefer to enjoy the VSO from the comfort of their home. We look forward to welcoming everyone back to the magic of the VSO, whether in-person or virtually, so that we can celebrate our love of music together.”

Angela Elster, President & CEO of the VSO and VSO School of Music

Maestro Tausk opens the season with an emotional journey of return to the historic Orpheum Theatre in the We’re Back! Gala Performance on Saturday, September 18, with a newly added repeat performance Sunday, September 19 at 2pm. The Gala features Beethoven’s Fidelio Overture, excerpts from Massenet and Berlioz, works from compelling Canadian voices Dinuk Wijeratne and Barbara Assiginaak, and closes with Tchaikovsky’s triumphant 5th Symphony.

Back to the Future In Concert makes the perfect opening to the TELUS Movie Nights series on September 23, 24 and 25, with audiences enjoying the full movie on the big screen in the Orpheum, while the VSO plays the score live underneath.

The season includes symphonic works by four indigenous Canadian composers that showcase the breadth and diversity of indigenous voices in classical music. Odawa First Nation composer Barbara Assiginaak, one of the “very best composers of her generation,” writes in a style informed by both her distinguished European mentors including Peter Maxwell Davies and Helmut Lachenmann, and her indigenous roots. Accomplished opera composer Ian Cusson writes new songs for mezzo-soprano Krisztina Szabó. Cellist, composer, and creator Cris Derksen opens the regular season with a new setting of her powerful work “War Cry” for orchestra and cello solo. Andrew Balfour journeys inside Tchaikovsky’s mind with his work “Pyotr’s Dream”, an original commission from Tafelmusik.

Celebrating the growing equity and influence of women in the symphony, the 2021-2022 season includes music by composers Anna Clyne, Linda Caitlin Smith, Cris Derksen, Barbara Assiginaak, Florence Price, Clara Schumann, Lili Boulanger, as well as first visits from conductors Anna Rakitina, a Dudamel Fellow with the LA Phil and assistant conductor at the Boston Symphony, and Speranza Scappucci, one of the most interesting conductors on the international scene and a regular at Opera Houses in Vienna, Rome, Barcelona, Zurich and Los Angeles.

The VSO builds on the success of TheConcertHall.ca with a new VSO Online digital broadcast series. The digital series continues this season with 10 full-length performances livestreamed directly from The Orpheum Theatre. Each concert in the series includes intermission interviews with guest artists and special guests. Highlights include Dvorak’s Symphony No. 9 “New World”, Prokofiev’s Romeo & Juliet, Beethoven’s joyful 9th symphony, and Mahler’s gorgeous Symphony No. 5.

The perfect introduction to the symphony, the VSO’s Musically Speaking series invites audience members inside the music with commentary and insights from the stage and live close-ups of performers on video screens either side of the stage. The five-concert series, Fridays at 7:00pm in the Orpheum, features gorgeous music performed by fantastic world-class guest artists including cellist Mischa Maisky.

London Drugs VSO Pops offers six concerts, featuring Vancouver talents Sal Ferreras leading a Latin Nights show, Christmas classics with singer Dee Daniels, and the global phenomenon, The Celtic Tenors. Late Night show favourite Paul Shaffer will be joined by Valerie Simpson and shares his symphonic renditions of his favourite pop, jazz and R&B tunes, and Canadian icon Steven Page returns to the VSO with Kevin Fox and Craig Northey for a heartfelt performance of some of the greatest Canadian music ever written. The series will end with a TELUS Movie Night screening of Singin’ in the Rain – Gene Kelly’s movie musical masterpiece, brought to life with live orchestral accompaniment.

The beloved Thursday matinee Parc Retirement Living Tea & Trumpets series continues with guest host Christopher Gaze and Maestro Andrew Crust taking you into the stories behind the music of Tchaikovsky, Copland, Debussy and more. The traditional service of tea and cookies in the hour preceding the concert is on hold, pending updates to health regulations.

The popular five-concert Sunday matinee Origino Kids Concerts series opens with Lemony Snicket’s The Composer Is Dead on Halloween afternoon. Then the beloved film The Snowman with live orchestra takes place in December followed by Carnival of OUR Animals in February. Composer William Rowson, former VSO Assistant Conductor, expands Saint-Saëns’ zoological introduction to the orchestra with a new animal from the Pacific-Northwest (created in consultation with the VSO’s Indigenous Council). VSO Principal Percussionist Vern Griffiths introduces kids to the music of living composers in The Composer is Here, and the series closes with the classic story Beethoven Lives Upstairs. The pre-concert family play zone in the Orpheum lobby is postponed until further notice.

TELUS Movie Nights with the VSO is back this season and packed with some of Hollywood’s favourite hits. They include Back to the Future, the holiday classic Home Alone, Harry Potter and the Deathly Hallows Part 1, and Star Wars: Return of the Jedi. Films will be shown on the big screen while the full orchestra performs the music score live.

The VSO concert series in Surrey and at the Chan Centre for the Performing Arts will continue but with three and two performances respectively. The North Shore Classics, VSO Chamber Series and Annex Series are postponed for this season.

ATTENDING CONCERTS IN THE COVID ERA

This fall, audience safety will be the VSO’s key priority. The COVID era is dynamic. Health measures change with short notice. As a result, how the VSO sells tickets and seats audiences is likely to shift throughout the season.

To accommodate reduced capacity, the VSO has made the difficult decision to postpone subscription package sales this fall. Subscriber seats will be carried over to the 2022-23 season.

Comfort spacing will be implemented to create space between ticket holder groups. Extra sanitation protocols will be in place at our venues and hand cleaning stations will be available at all venues.

The new BC vaccine protocol will require proof of vaccination to enter concert facilities. The VSO has introduced a new app to support touchless digital tickets. The app is freely available in Apple and Android app stores.

Tickets to the opening fall special concerts are currently on sale online at VancouverSymphony.ca.

Tickets to all regular series concerts from October through December will go on sale to the general public on Monday, September 13. VSO Donors and Subscribers will get presale access starting Thursday, September 9.

Tickets can be purchased online at VancouverSymphony.ca or by contacting the VSO Box Office at 604-876-3434. The Box Office will resume regular phone hours starting Tuesday, September 14.

STAY UP TO DATE

Changes or additions to VSO policies will be kept up to date at VancouverSymphony.ca/FAQ