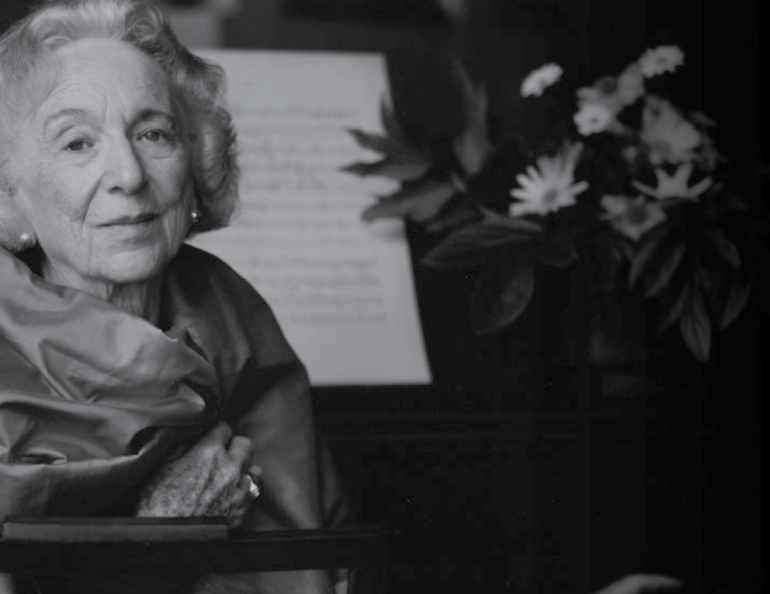 The Vancouver Symphony Orchestra and Maestro Otto Tausk are pleased to present the Jean Coulthard Readings and Mentorship Program. This year we will be introducing a NEW and expanded format that will span from October 15, 2022 – May 31, 2023.

The Jean Coulhard Readings were started by Rodney Sharman in 1997, to provide a learning opportunity for Vancouver’s student composers, and for the VSO to discover new musical voices.

Named in honour of one of BC’s most beloved composers, the Jean Coulthard Readings and Mentorship Program gives emerging BC composers an invaluable opportunity to develop their orchestral writing under the guidance of the VSO and have their work read by a professional orchestra. Approximately six composers will be selected to participate in the program.

Click here for more information, including eligibility and important dates.

If you have any questions, please email education@vancouversymphony.ca.

Generously supported by
The Azrieli Foundation

The VSO Jean Coulthard Readings & Mentorship Program is collaborating with the VSO School of Music International Master Teachers Program to open one of our Guest Composer Seminars to the public!

As a part of the expanded program, the participating composers will receive the opportunity to attend seminars and masterclasses with Guest Composers whose works will be performed by the VSO this season. We are thrilled to open Vivian Fung’s seminar and masterclass to the public, to attend either via livestream or in-person at the VSO School of Music.

For more information about the International Master Teachers Program, please visit the VSO School of Music.

Upcoming performances of Fung’s work include the world premieres of her expanded Flute Concerto, commissioned by the Vancouver Symphony Orchestra and performed by VSO Principal Flutist Christie Reside; a new orchestral work for Houston-based ROCO (River Oaks Chamber Orchestra); and a short piano work based on Ligeti’s Etudes, to be performed by Han Chen, part of the commissioning project “Ligeti Etudes meets 18 Composers,” celebrating the composer’s centenary in 2023; plus the European premieres of Baroque Melting with Berner Symphonieorchester, conducted by Gemma New, and Prayer, presented by the Argovia Philharmonic, both in Switzerland.

In 2012, Naxos Canadian Classics released a recording of Fung’s Violin Concerto No.1, commissioned by Metropolis Ensemble, which earned Fung the 2013 JUNO Award for Classical Composition of the Year.

Born in Edmonton, Canada, Fung received her doctorate from The Juilliard School. She lives in California with her family. www.vivianfung.ca.

“Horror composer Edward Top acted as a kind of snake, hypnotizing listeners as frightened little bunnies”  is what Dutch newspaper de Volkskrant wrote 25 years ago.  As part of Vancouver’s kaleidoscopic music scene since 2010, Top’s music has been identified by The Vancouver Sun as “earthy neo-primitivism” and “a dreamlike expression of (…) the collective unconscious” by the Georgia Straight.

Top studied composition and violin at the Rotterdam Conservatory and, after working and traveling in the Far East for several years, continued studies at King’s College London.  Edward has been Head of Composition at the Vancouver Academy of Music since 2014, and served as Composer-in-Residence with the Vancouver Symphony Orchestra working with conductors Bramwell Tovey and Otto Tausk.  Holland Symfonia, Schoenberg Ensemble, Tokyo Sinfonietta, among others, performed his compositions, and the Toronto Symphony Orchestra recently premiered the commissioned work Eruption on tour in Ottawa, Montreal, and Toronto.