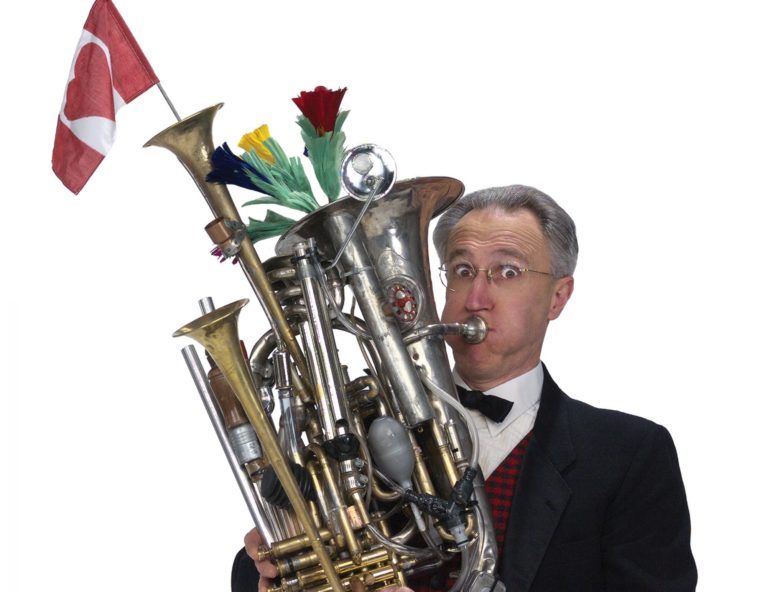 Al Simmons’ one-man, multi-prop, music-filled, off the wall performances have elevated audiences world-wide to collective giggles and all-out guffaws. At once childlike in its simplicity and sophisticated in its execution, Al’s humour touches a responsive chord in people of every age.

Vaudeville’s half-century run of popularity may have died back in the 1940's, but don’t try to tell that to Al Simmons or the crowds of fans that have packed theatres across North America to see him. Into the tradition of the great comedy kings--Danny Kaye, Spike Jones and Jimmy Durante--comes Al Simmons, ­ a man dedicated to the all but lost art of combining comedy with song, dance, magic, and sight-gags. The end result is plenty of good-natured fun in a one-man variety show.

In the entertainment business since 1970, the popular Manitoba-based children’s performer is likely Canada’s most versatile comedian.  He puts on a funfest, full of bizarre gadgets, wild costumes, unique songs, crazy vaudeville-inspired routines and of course bad puns.

It's as if he was genetically engineered for comedy. From his distant Romanian and Scottish ancestors Al has inherited a quick wit, lanky legs, large flipper like feet and a rubber face. His father, a charismatic magazine salesman and would be performer, spent many hours telling tall tales and re-enacting old vaudeville routines in their living-room.  Al's Mom taught the budding young vaudevillian the genteel art of punning, silly songs and magic tricks. But the most important thing that his parents taught him was how to use his talents to do good and bring happiness to the world without hurting anyone.   His extended family was made up of punsters, pranksters and eccentrics, including Al's Uncle Nick, who toured Eastern Canada as Steamboat Harris, best known for playing a ukulele made out of a toilet seat!

Al’s debut album "Something’s Fishy at Camp Wiganishie" earned a Juno nomination for best Children’s Album. His follow up recording was a brilliant ode to vaudeville, "Celery Stalks at Midnight". It won the 1995 Juno Award and the 1996 U.S. Parents’ Choice Award. "The Truck I Bought From Moe", his third album, garnered a Juno nomination and a Parents’ Choice Award. He is an author; “Counting Feathers,” his illustrated children’s book, was short-listed for the McNally-Robinson Book of the Year in 1997. He received a coveted Cable Ace Award nomination for his music video "I Collect Rocks," which is also the title track of his brand new DVD that contains 6 of his wacky music videos and features his Horse-cycle “Ol’ Spoke”.

Al has won a Juno Award (The Canadian equivalent to a Grammy), he’s a Member of the Order of Manitoba, the recipient of the Winnipeg Symphony’s Golden Baton for Artistic Achievement. He was a gold medal winner at the 2005 World Championship Zuccini Race, and a restaurant in his hometown named a hotdog after him.

Al and his wife Barbara have been married since 1976 and live in harmony and pandemonium near the small Manitoba town of Anola. They have three sons, Karl, Will, and Brad, and four granddaughters, Ashley, Kaitlin, Marley and Clover. Their home, built around two train cars, is equipped with a fire-pole that connects an upstairs prop-shop with a main-floor playroom lined with mattresses and filled with pillows. Their 15-acre yard is flowered with zip lines, Tarzan ropes, slides and swings.

A Creative Genius with the Soul of a Vaudevillian -Al Simmons is a one-man cast of thousands! A modern day comedy chameleon! A wizard of one-liners!