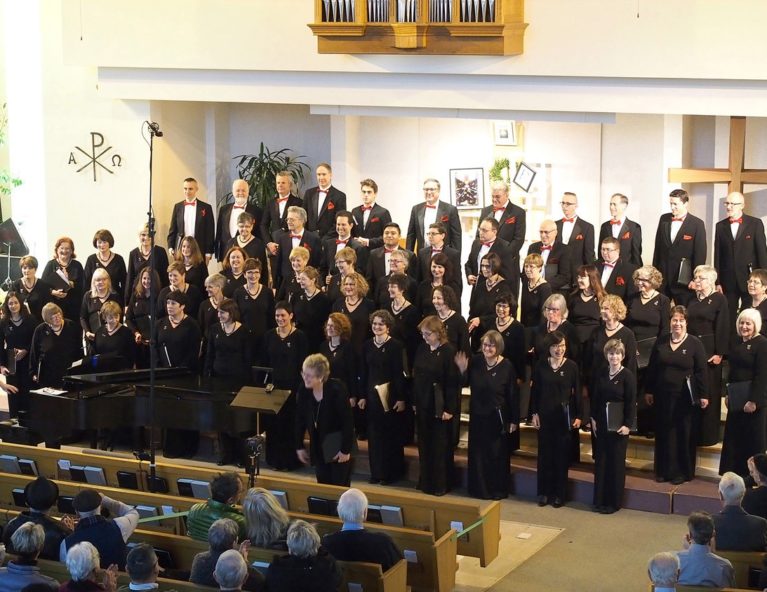 AMABILIS SINGERS
The Amabilis Singers is a mixed choir of 60–70 members, performing in locations around the Lower Mainland, throughout B.C. and abroad. As a self-supporting community choir, it fosters and promotes the love of choral music, singing, and performance, primarily in the Burnaby/New Westminster area. The ensemble looks forward to an exciting year ahead as it celebrates the 40th anniversary of its founding. The Amabilis Singers originally formed in 1980 as The Douglas College Community Choir and in 1989 became an independent community choir. The group’s West Coast roots served as inspiration for the new name: the Amabilis Fir (also known as the Pacific Silver Fir) is a species indigenous to coastal forests. The botanical name Amabilis means “lovely”, which the choir was quite content to assimilate as a descriptor! Ramona Luengen was named Artistic Director in 2006. The current season includes a Christmas program, Night of Wonder; a performance of Magnificat by the remarkable young Norwegian composer Kim André Arnesen; and a special 40th Anniversary celebration.

RAMONA LUENGEN
Dr. Ramona Luengen is respected for her work as a conductor, educator and composer. Her works have been performed and broadcast throughout North America, Europe, Australia, New Zealand and Japan. Luengen’s opera for young audiences, Naomi’s Road, has received over 350 performances in Canada and the United States. Her Stabat Mater, for solo, women’s choir and orchestra, was awarded Outstanding Choral Composition and Choral Event of the Year by the Canadian Association of Choral Conductors. A sessional lecturer for twelve years at both UBC and SFU, Luengen taught a variety of courses in choir, composition, theory and contemporary music.