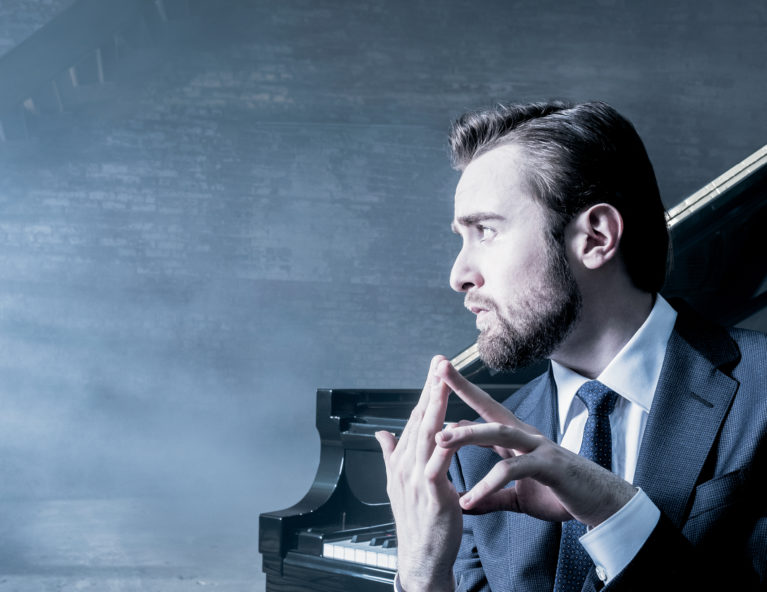 Grammy Award winning Russian pianist Daniil Trifonov (dan-EEL TREE-fon-ov) – winner of Gramophone’s 2016 Artist of the Year award – has made a spectacular ascent of the classical music world as a solo artist, champion of the concerto repertoire, chamber and vocal collaborator, and composer. Combining consummate technique with rare sensitivity and depth, his performances are a perpetual source of awe. “He has everything and more ... tenderness and also the demonic element. I never heard anything like that,” marveled pianist Martha Argerich. Trifonov recently added a first Grammy Award to his already considerable string of honors, winning Best Instrumental Solo Album of 2018 with Transcendental, a double album of Liszt’s works that marks his third title as an exclusive Deutsche Grammophon artist. As The Times of London notes, he is “without question the most astounding pianist of our age.”

Trifonov launches the New York Philharmonic’s 2018-19 season, playing Ravel’s jazz-inflected Concerto in G for the opening-night gala under incoming Music Director Jaap van Zweden before rejoining the orchestra the following night for Beethoven’s mighty “Emperor” Concerto. He revisits the Ravel, both on tour with the London Symphony and Sir Simon Rattle, and during a residency at Vienna’s Musikverein that also sees him give the Austrian premiere of his own Piano Concerto. Similarly, the “Emperor” is the vehicle for further collaborations with the London Symphony and Michael Tilson Thomas, the National Symphony and Gianandrea Noseda, the Cincinnati Symphony and Louis Langrée, and the Cleveland Orchestra and Franz Welser-Möst, with whom the pianist embarks on a tour of Asia.

During a multi-faceted, season-long residency with the Berlin Philharmonic, Trifonov plays Scriabin’s concerto under Andris Nelsons’s leadership. Other orchestral highlights include a return to Carnegie Hall’s Stern Auditorium for Schumann’s concerto with longtime collaborator Valery Gergiev leading the Met Orchestra, Prokofiev’s Third with Marin Alsop and the Chicago Symphony, and Rachmaninov’s Third with Nelsons and the Boston Symphony. The 2018-19 season also brings a new Deutsche Grammophon release, Destination Rachmaninov: Departure, on which the pianist performs the Russian composer’s Second and Fourth Concertos, again with the Philadelphia Orchestra and Yannick Nézet-Séguin, his partners on 2015’s Rachmaninov: Variations.

In recital this season, Trifonov plays Beethoven, Schumann and Prokofiev on Carnegie’s mainstage and in Berlin, where his Berlin Philharmonic residency features multiple solo and chamber performances. These include accounts of his own Piano Quintet, of which he also gives the Cincinnati premiere with the Ariel Quartet. In Berlin, as well as at New York’s 92nd Street Y, he plays duo recitals with his frequent partner, German baritone Matthias Goerne.

Last season, the pianist released Chopin Evocations, his fourth album for Deutsche Grammophon, which pairs works by Chopin with those of the 20th-century composers he influenced. A similar program took Trifonov to recitals throughout the U.S., Europe and Asia, crowned by a date at Carnegie Hall. This took place during his seven-concert, season-long Perspectives series, of which other highlights included a performance of his own piano concerto with longtime collaborator Valery Gergiev and the Mariinsky Orchestra. The pianist curated similar series at the Vienna Konzerthaus and in San Francisco, where he gave a season-closing performance with the San Francisco Symphony. He also undertook a solo tour of Asia, and European tours in collaboration with Gidon Kremer and Kremerata Baltica, the London Philharmonic, the Royal Concertgebouw Orchestra, and the La Scala Orchestra. Additional orchestral appearances included Strauss’s Burleske with the Spanish National Orchestra and Bavarian Radio Symphony Orchestra; Schumann with Lisbon’s Gulbenkian Orchestra and the Berlin Philharmonic; Prokofiev with the Mariinsky and Cleveland Orchestras; Scriabin’s Piano Concerto with the Seattle Symphony and Ludovic Morlot; a performance of his own Piano Concerto with the Detroit Symphony; and further Rachmaninoff performances with the Munich Philharmonic, Toronto Symphony, and the Philadelphia Orchestra.

The 2013-14 season saw the release of Trifonov: The Carnegie Recital, the pianist’s first recording as an exclusive Deutsche Grammophon artist; captured live at his sold-out 2013 Carnegie Hall recital debut, the album scored a Grammy nomination. Besides the similarly Grammy-nominated Rachmaninoff Variations, recorded with the Philadelphia Orchestra and Yannick Nézet-Séguin, his discography also features a Chopin album for Decca and a recording of Tchaikovsky’s First Piano Concerto with Gergiev and the Mariinsky Orchestra on the ensemble’s own label.

It was during the 2010-11 season that Trifonov won medals at three of the music world’s most prestigious competitions, taking Third Prize in Warsaw’s Chopin Competition, First Prize in Tel Aviv’s Rubinstein Competition, and both First Prize and Grand Prix – an additional honor bestowed on the best overall competitor in any category – in Moscow’s Tchaikovsky Competition. In 2013 he was also awarded the prestigious Franco Abbiati Prize for Best Instrumental Soloist by Italy’s foremost music critics.

Born in Nizhny Novgorod in 1991, Trifonov began his musical training at the age of five, and went on to attend Moscow’s Gnessin School of Music as a student of Tatiana Zelikman, before pursuing his piano studies with Sergei Babayan at the Cleveland Institute of Music. He has also studied composition, and continues to write for piano, chamber ensemble, and orchestra. When he premiered his own Piano Concerto in 2013, the Cleveland Plain Dealer marveled: “Even having seen it, one cannot quite believe it. Such is the artistry of pianist-composer Daniil Trifonov.”