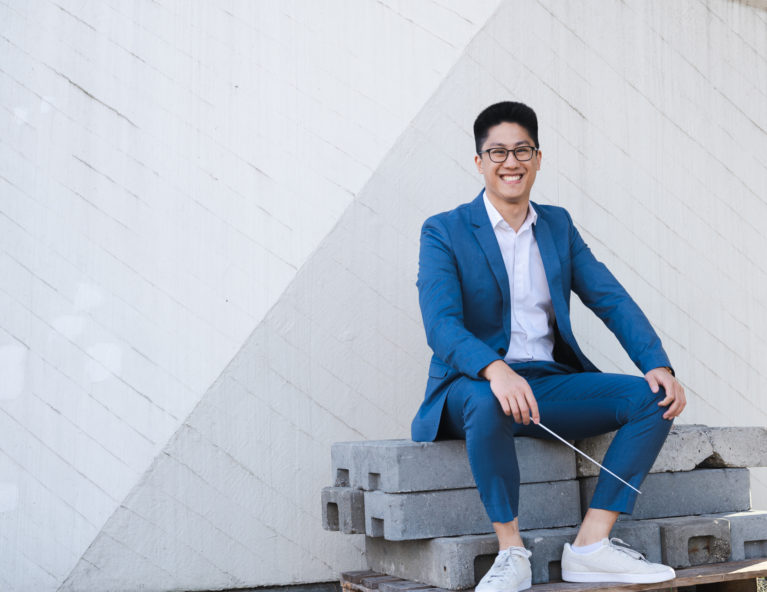 David Bui, 1st Prize Winner of the Ionel Perlea International Conducting Competition, graduated from the Hochschule für Musik Hanns Eisler Berlin and simultaneously made his debut with the Konzerthaus Orchester Berlin in 2017. Since then, he has continued his studies in Hanns Eisler’s masters program under the guidance of Prof. Christian Ehwald and Prof. Hans-Dieter Baum. Participating in the ERASMUS exchange program led him to the Norwegian Academy of Music, where he studied with Prof. Ole Kristian Ruud and Prof. Sigmund Thorp in the fall semester of 2019.

In October 2020, he started his Konzertexamen studies under Prof. Ulrich Windfuhr at Hochschule für Musik und Theater in Hamburg.

In addition to his studies, David Bui has participated in several festivals around the world. He took part in the Bartók Festival in Szombathely, Hungary, the Mendelssohn Festival in Hamburg, Germany and assistant conducted the PRISMA Festival in British Columbia, Canada. He was recently invited to participate in the Pärnu Festival in Tallinn, Estonia, where he studied with Paavo, Neeme and Kristjan Järvi and Leonid Grin. During his time there, he received a scholarship from the DAAD-PROMOS-Project-Sponsorship. David Bui was also one of the few students hand selected by Maestro Riccardo Muti in a live-audition, to study with him in the 2019 edition of the Riccardo Muti Italian Opera Academy in Ravenna, Italy.

David Bui won 2nd prize in the International Conducting Competition Jeunesses Musicales Bucharest and was one of the finalists of the prestigious INTERKATION-Conductors Workshop in Berlin, Germany, in which he worked with Maestro Lutz Köhler and Das Kritische Orchester®. David Bui has appeared as conductor of the Brandenburger Symphoniker, the Karlovarský Symfonický Orchestr, Hamburger Symphoniker, the Filharmonia Zielonogórska, and proudly represented Germany at the Musikfesttage „an der Oder”. In early 2019, he made his debut with the Hamburger Camerata in the world-famous Elbphilharmonie.