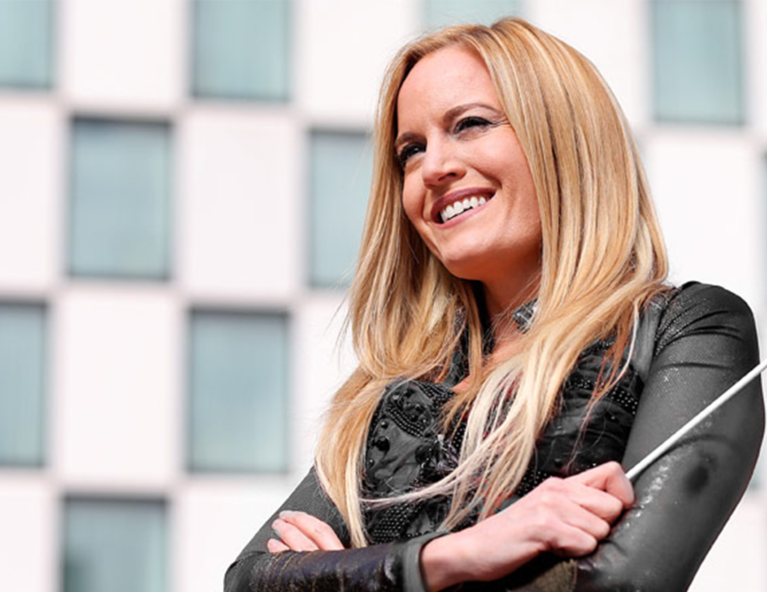 Eímear Noone is a California based award-winning Irish composer and conductor. She has composed extensively for film and videogame.  She is responsible for some of the most enduring soundscapes on World of Warcraft and other best-selling videogames. She has conducted orchestras such as the Royal Philharmonic, Pittsburg Symphony and The Philadelphia orchestras and has worked on scores for directors such as Gus Van Sant and Joe Dante, orchestrating for Oscar nominee Javier Navarrette (composer of Pan’s Labyrinth) creating haunting music for thrillers Mirrors and The Hole. Eímear founded a major European game music festival in Ireland and is an advocate for and mentor to creative women in tech and music. Eímear also consults on Amazon’s Mozart in the Jungle as coach to female lead, Lola Kirk.

“The Irish Queen of Games Music” (The Irish Independent) is one of the world's premier conductors of game scores. In addition to media concerts- The Legend of Zelda, Symphony of the Goddesses and Video Games Live (VGL) more recently her work included Scheherazade (Rimsky-Korsakov), The Firebird (Stravinsky) and The New World Symphony (Dvořák). Eímear has performed sold-out shows at The Mann Center, Wolftrap and Beijing’s Olympic Stadium performing to an audience of 80,000. She has led some of the world's great ensembles, including: Dallas Symphony Orchestra, Sydney Symphony Orchestra and Washington National Symphony Orchestra. Eímear has had the pleasure of conducting the orchestra for the Los Angeles Ballet in their inaugural production of Tchaikovsky's The Nutcracker earning recognition from the LA Times.

In December 2016, she conducted her own program, Video Games Classic, with the RTÉ National Symphony Orchestra. The program featured game music alongside the classics that inspired the game’s composers. Eímear’s programming brings together her formative classical influences and training at Trinity College and her passion for connecting new audiences with the symphonic tradition with inimitable joy and creative edge. Eímear Noone is a unique artistic voice. She has also conducted for artists such as Gladys Knight and electronic dance music producer, BT at Miami Music Week.  She has also shared the stage with Pierce Brosnan and Roma Downey in her own production This Is Ireland.

As a primary conductor for Video Games Live, Guinness World Record’s longest running orchestral touring show, Eímear has conducted in China, Brazil, Canada, Qatar, Europe, Mexico and Malaysia. She has also toured as conductor for The Legend of Zelda, Symphony of the Goddesses, a full four- movement symphony created from the themes from this iconic videogame.  Zelda holds two Top 10 spots in Time’s All Time Greatest Video Games. Eímear was invited to conduct on the 25th Anniversary recording, which set industry records for soundtrack sales. She was chosen by Nintendo to conduct the first ever 3D filming of a game score; a technological benchmark in the ongoing virtual reality revolution. She has also recorded game scores for Sony Interactive.

Through her music on World of WarCraft and the expansion, Warlords of Draenor, Eímear’s music has reached over a 100 million people and continually inspired players to invent and build new worlds for nearly 15 years. This score achieved the Hollywood Music in Media Award for Best Video Game Score and was nominated for 5 Annual Game Music Award and The ASCAP, Composer’s Choice Award upon release. Eímear’s composition collaborators include leading lights of film and contemporary music; Trevor Morris, Trevor Jones, David Campbell, Christopher Young, BT and Rob Carvallo.

Eímear has recorded on most of the world’s premier scoring stages such as The Newman Scoring Stage (FOX), The Eastwood Scoring Stage (Warner Brothers), Skywalker Ranch, Capitol Records and Abbey Road. She has recorded almost all of the scores for Blizzard Games over the past 9 years, including: Overwatch; Hearthstone; Heroes of the Storm; Starcraft II; and conducted the BAFTA nominated score to Diablo III.

From the greatest musical and storytelling traditions; Eímear Noone is a timeless artist and a woman of right now.